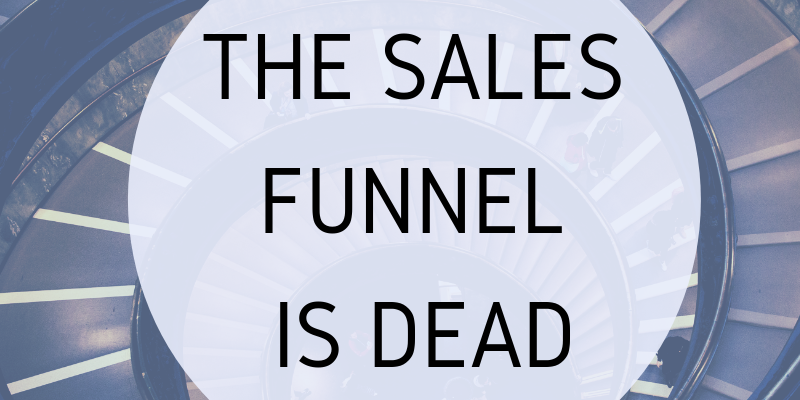 Conversion funnels are tangible crowd-pleasers but are they, in reality, an outdated and misleading way of converting customers? Maybe it’s time to rethink the traditional sales funnel?

One of the more central approaches within sales and marketing is the use of funnels. Conversion funnels can be applied to many different scenarios but is usually a method of getting website visitor to take a desired actions. It is a way for companies to systematically move users from one stage to another. The main goal is to lead the users from awareness to buying a product or service.

Since the funnel methodology was first invented by St. Elmo Lewis in 1898, it has changed very little. It seems a little ironic that so many businesses rely on a method invented prior to the invention of the internet, to convert users online. Funnels give a misleading and unrealistic picture of real-world user journeys. Funnels are based on the conception that the buying process is linear.

It’s naive to think that prospective customers enter the funnels from the top and work their way down the funnel. Today, consumers are more empowered and connected than ever, resulting in users making more informed purchase decisions, causing them to jump between stages in comparison to following a linear purchasing flow.

Consumers have gotten so used to researching and comparing everything from products to prices online. Which means that when entering a website they often already know what to get and are ready to buy. In this case, many of the stages in the traditional funnels becomes irrelevant and redundant.

Websites have thousands of user journeys

Canecto, a Danish startup, have studied data patterns and user behaviour on hundreds of websites including both B2B and B2C throughout the past year. They have found that the majority of all websites have at least hundreds of unique user journeys. These findings are raising a lot of question in relations to the use and efficiency of traditional sales funnel tools such as Google Analytics.

Both European and American companies took part in the study and the results are quite astonishing. Amongst the participants were a large international clothing brand with stores across Europe and a suitable large webshop. Data showed that their users undertake approximately 2.700 user journeys on their website towards just a few selected target pages. This means that the total number of user journeys throughout the entire website would be much higher.

With these findings in mind, the use of traditional funnels can seem obscure. Brands can’t expect consumers to follow the paths, that they have laid out for them. Instead, they should focus on building valuable and engaging relationships.

Funnels can be a useful way of structuring website flows but marketers need to catch up with the ever-changing digital landscape and user behaviours instead of relying on a method that was invented 120 years ago. It’s time to rethink the way we create online experiences in order to meet the need of consumers.

How to do great Twitter campaigns without analytics
February 3, 2021

All I know is that I know nothing – what is the value of Content Analysis?
February 3, 2021

Recent posts
Recent comments
Go to Top
We use cookies on our website to give you the most relevant experience by remembering your preferences and repeat visits. By clicking “Accept All”, you consent to the use of ALL the cookies. However, you may visit "Cookie Settings" to provide a controlled consent.
Cookie SettingsAccept All
Manage consent

This website uses cookies to improve your experience while you navigate through the website. Out of these, the cookies that are categorized as necessary are stored on your browser as they are essential for the working of basic functionalities of the website. We also use third-party cookies that help us analyze and understand how you use this website. These cookies will be stored in your browser only with your consent. You also have the option to opt-out of these cookies. But opting out of some of these cookies may affect your browsing experience.
Necessary Always Enabled
Necessary cookies are absolutely essential for the website to function properly. This category only includes cookies that ensures basic functionalities and security features of the website. These cookies do not store any personal information.
Non-necessary
Any cookies that may not be particularly necessary for the website to function and is used specifically to collect user personal data via analytics, ads, other embedded contents are termed as non-necessary cookies. It is mandatory to procure user consent prior to running these cookies on your website.
SAVE & ACCEPT